He… has no freaking clue what he just unleashed upon himself, does he?

Well, GATE episode 2 was out for a while, but I only got around to it just now.  It’s… kinda slow-moving.

So, you know how episode 1 ended with basically the JSDF moving through the Gate and encountering a huge army?  Episode 2 outright offscreens that bitch and tells us that the army got completely bodied, the JSDF took control of the Gate, and the forces sent to retake the Gate also got completely bodied.  The Emperor (pictured above) calls for an alliance of kingdoms in the continent to fend off the invaders.

One of the leaders of the coalition is a badass veteran named Duran.  He’s the only one that realizes something is very wrong with the whole situation.  The Imperial Army was supposed to be keeping the JSDF at bay at Arnus Hill while the coalition comes in to reinforce… but according to scouts, the Imperial Army is nowhere to be found.  But whatever.  The first two attacks result in the coalition getting completely slaughtered.  Duran leads his troops for a night raid, but they are no match for modern tactics and equipment, and their army is very quickly spotted.  Left with no other options, Duran leads his troops for a last-ditch charge that falls just like the others.  For dramatic purposes, the JSDF’s aim gets completely retarded while Duran lets loose an arrow that breaches the JSDF’s camp (and, we assume, does fuck all).  Still, you can’t deny the balls on this guy.

Now, I just want to take a second to talk about how cheap the animation is.  I already mentioned the annoying camo pattern layering.  Pay attention, and you’ll see one of the tricks they use to make this less noticeable is that they make the JSDF soldiers as motionless as possible.

Something new in this episode: Unmoving backgrounds.  There’s literally a scene in which the camera pans across the sky, and we see birds flying but not moving.  It’s hilariously cheap.

Also, the birds are drawn like how I learned to draw birds in Kindergarten.

It seems the massacre was according to the Emperor’s plan.  One wonders just what his plan is, or if he understands the full scope of the power of the other side.  At times it seems like he summoned this unbeatable army on purpose, but some modern concepts just seem like they should be outside of his capacity to grasp.

We’re later introduced to the Emperor’s daughter, Pinya (What, not Pina?  Lemme guess… we’re going to call her “Pinya Korada,” aren’t we?), who leads her own Order.  The Emperor calls on her Order to investigate the JSDF and Arnus, and she’s excited to prove herself.

Not a big fan of her redesign. She looks a little too cute and is lacking her usual aura of authority.

YOU DARE MOCK THE MILITARY TACTICS OF THE TURTLE?!

I… don’t really have to explain this scene.  It’s American bullshit.

Youji is assigned to lead a recon squad with the mission to gather intel on the people, language, culture, etc. of the area, and we’re finally introduced to the core squad.  Not even going to put in the effort to gloss over most of them; LET’S TALK ABOUT KURIBAYASHI.

WHAT DID THEY DO TO YOOOOOU?!

Yes… THAT is Sergeant Kuribayashi.  She’s short… and that’s about the only thing they got right.  I’m going to put this out there: I LOVE Kuribayashi, and I have a mental image of her.  This thing on my screen barely resembles that image.  Kuribayashi is supposed to be tough, full-figured, a little condescending, fiesty as fuck, mature, and above all else, expressive.  She’s by far the most expressive member of this squad, and how is she presented in the anime?  AS AN EXPRESSIONLESS, QUIETLY CRITICAL MIDDLE SCHOOLER.  WHAT THE ACTUAL FUCK.

Seriously, it’s impossible to reconcile the above screencap to this: 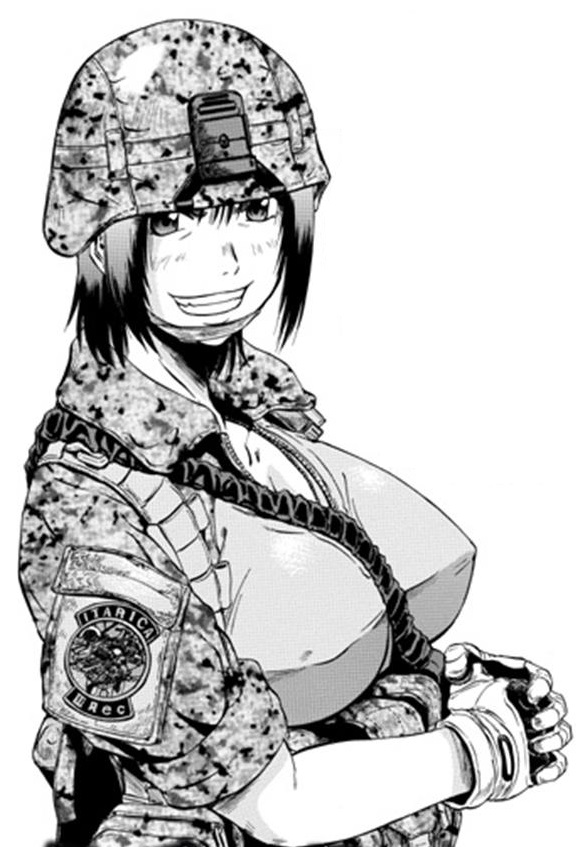 It fails even at the most conservative levels.

Seriously, the only thing they got right was that she’s short… but that doesn’t mean she’s scrawny!  Hell, just LOOK AT THE EYES.  Manga Kuribayashi has life and focus, while Anime Kuribayashi has this weird blank stare thing going on.

But okay, okay… maybe Kuribayashi wasn’t like that in the novel.  Maybe the anime adaptation is closer to the novel.  Hell, as far as I can tell, the anime is closer to her novel description, which is literally just “petite, but with big breasts for her size, and a martial artist.”  But, y’know, fuck that; let’s have some variety!  Honestly, Anime Kuribayashi is just a couple steps short of being a full-on moeblob.  If GATE ever gets figurines, and we get one of Kuribayashi, and it’s based off the anime design… I’m breaking something.  I don’t know what, but I know I won’t be able to control myself.  To be fair, it’s not like she’s ever been important enough to, say, make it to the cover of one of the novels, but… I promise if that happens, I will break something.

So anyway, where were we?

Oh, right… JSDF spots a dragon, there’s a fire in the forest, they stumble upon a wrecked settlement… and Tuka’s in the well.

Well, at least you can’t go wrong with her.

Surprisingly, the episode ends right there.  I mean, yeah, we saw a whole lot of roflstomping, but it still felt like nothing happened.  Hope the pace picks up soon, because if we continue to follow this pace, we’re facing the prospect of the season ending with the siege of Italica, and the series ending with the Fire Dragon battle.  I mean, that’s about what I expected, but… it’s going to feel sooooo slow.